How Jevra Avn Soll Came to The City of Veresh, Part II

And then, having sipped at last from the cup from which he never drinks and tasted for the first time in many years the bitter sweetness of the black wine of Shende, Jevra Avn Soll will replace his cup and only then, hidden still within the darkest and coldest corner of the Inn of the Fallen Star, will he continue his tale.

'The guardian who came at my call was little more than a child, her face rounded and lacking the definition that comes with age, her small, slim frame made yet smaller by the vastness of the gates that separated us.  She wore robes whiter even than the sands that surround the city and unmarked by the slightest mote of dust and her eyes were the green of polished malachite.  Unspeaking, she stretched out a hand towards me.  I understood this to be a command to display the mark I had obtained from the stranger in the inn and reached into my sabretache, withdrawing at last the single pink petal that was the summons to Veresh.  I held it up towards her, miraculously unblemished and cradled in my palm.  On seeing it she nodded solemnly and touched a hand to the gates, which swung back smooth as stalking cats even as the little petal in my hand withered in an instant into nothingness.  It seemed that the stranger had not played me false: the way to the City of Veresh lay open before me at last. 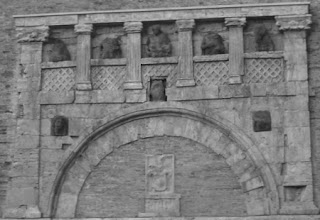 And so it was that I entered that forbidden city, my little guide stepping before me with a steady precision, careful always as to where she placed her feet, much as a deer will step as it moves through forest grass.  From the gates we moved into a high-roofed tunnel, carved from the red rock of the mountain and lit by oil lamps whose wicks were candleblossom and whose clear and steady light was reflected by the polished stone of the mountain, bathing the tunnel and all that passed through it in a deep red glow.  We moved onward in silence, while all the while I tried to control the excitement that bubbled within me at the thought of what I should see when at last we had passed beyond the tunnel's walls.

I was to be disappointed: for, at the tunnel's end, I found myself in a long, open-roofed corridor off which led many doors.  I must have sighed, for my little guide stopped her stately progress and turned to me, a questioning look on her face.

"I had hoped to see fabled Veresh", I explained, "not mere walls".  It was, I concede, a little brusque of me, but my journey to this place had been one of many years and no little sacrifice.  I felt I deserved more.

My guide's face showed no sign of emotion.  Instead, to my surprise (I confess I had thought her mute), she answered me, in a voice that was high and an accent I could have mistaken for my own.

"It is the custom of the City that all who come here should first be brought before the Khedive or, if they be summoned by her, before the Mistress of The White Veil.  Only then are they suffered to move about as they may, for, as you know, the city is forbidden and its sights are not surrendered at once".

I was  not greatly perturbed by my guide's words, having anticipated just such a condition and having, as a result, used all that I had learned of the City to construct what I deemed an excellent tale to justify my attendance.  It was, I knew, a risk but the success of my venture had been at hazard from the moment I took the golden sandbird from the ill-favoured stranger in the inn and agreed to pay his price.  Despite my self-reassurance in this matter, some disappointment must have shown on my face, for my guide was swift to give me comfort.

"Fear not, Jevra Avn Soll, for you may ask of me what you will and I will describe to you all that you are yet to walk among".

And so we walked along the corridor and I asked much and she answered more.  As, beyond a door of dearwood, I heard  many-voiced laughter, it was explained that I was passing the Gardens of the Nine Maidens, wherein are grown the purple-petalled flowers whose scent inspires mirth and strange dreams.  When, beyond a many-spangled door, I heard the stepping of a multitude of feet, I learned that we were passing the Street of The Starwatchers, who march always in step, their eyes trained ever upon the sky.  And it was by calling on my guide to explain to me the source of each sound we passed, that I learned of the River of The Thousand Mouths and of Hati's Academy and of the Alley of the Jewelburners and the Aulah of the Second Khediva wherein she and her successors kept their lovers and of so many other wonders that lie within the City of Veresh, all of which only increased my longing to see them for myself.   And all the while, it never once occurred to me to ask how my guide had come to know my name.

And then we came to a door magnificent in both its size and construction, being crafted from bronze and from jewels and from the wood of trees and the shells of creatures both known and unknown to me.  And at this door my little guide stepped softly to one side and spoke a single word, at which the door swung open before me and I came at last into the Court of the Khedive.

The room was small and bare of ornament, its sole significant feature the thick-legged, rush-seated stool that stood upon a low dais at its centre; it's simplicity would have shocked me had I not been already amazed at the figure who sat upon the stool: it was the very same stranger with the twisted lip and the heavy hand and the scar running the length of his naked arm who had come to me in the Inn of the Fallen Star and had offered me the golden sandbird and the petal which would grant me entrance to Veresh.

"And so you have come to this Forbidden City".  There was a sadness in his voice as he said it, as if each word held within it the spirit of a sigh.

"I have", I replied, seeking to cloak my confusion in the simplicity of my response.

"I am surprised", continued the man I could now only presume was the Khedive himself, "I had thought the price would be too great even for you".

At this I could contain myself no longer.  "But your price was paid, sure enough", I said.

The Khedive shook his head.  "No, Jevra Avn Soll, it was not", he said, "For did I not demand of you that which you prize most highly?"

This angered me and my reply was hot, "And did I not render to you the red rubies that are called Eyes of  Lem, which were all of value that were left to me in the world?"

The Khedive stepped down from his stool and came towards me.  "These?" he said, opening up that great hand of his once more and showing me the very same jewels I had given him.  "No, Jevra Avn Soll", he continued, "these are not the price I sought.  And that, I must tell you, is an error I must correct".  And that he did.

When at length my price was paid and the Khedive quit me, my little guide returned to me and I, who had hungered so long to see the sights of Veresh, was led at last through all its wonders: through the Aulah of the Second Khediva to the River of The Thousand Mouths, from the Alley of The Jewelburners to the Gardens of The Nine Maidens, from Hati's Academy to the Street of The Starwatchers and to so many, many wonders beside.  And in each case she was careful to describe to me in the finest detail all that was to be seen and all the delights it brought to the hungry eye.  And then, her promise to me fulfilled, she brought me to the gates and caused them to be closed between us, letting me know that they would forever be barred against me.

And so it was that I turned away from Veresh and made my way back to Otherwhile and to Farla and to this  darkest and coldest corner of the Inn of the Fallen Star and here I have been ever since.'

And then Jevra Avn Soll will fall silent and stare once more into the cup of black liquid from which he has drunk but once.  And, though he be concealed in the dark, should you look deep into that cup, you will see reflected in the black surface of the wine of Shende the face of Jevra Avn Soll, who sought to see all the world and more and travelled even to the forbidden City of Veresh, and you will see that his face is old and much lined and that, where his eyes once were, there lie instead the red, red rubies that were once called The Eyes of Lem.
at 09:09