Religion has an odd place in fantastical writing.  In the real world, religion is a thing of huge importance.  Whether you are a theist, an agnostic or an atheist, religion has shaped your culture and every culture with which you will ever come into contact.  Whatever else it may or may not be, religion has for thousands of years been the vector for much of humanity's thought about the very fundamentals of its existence: why are we here?; how are we here?; what is the nature of good and of evil?; is it okay for me to bash that bloke over the head because he doesn't believe what I believe and, if it isn't, can I at least be very rude about him behind his back?  Religion has founded hospitals, created universities and erected vast numbers of extraordinary buildings.  It's played its part, both good and bad, in everything from wars to science.  Its tenets have guided and misguided our laws.  Religion is so fundamental to our existence that it is one of the three things, alongside sex and politics, that the English were encouraged never to discuss (this was particularly inconvenient during the Noughties, when a preponderance of good weather left the subject of how much your house had increased in value as the only reliable topic of conversation at godawful middle-class dinner parties up and down the country). 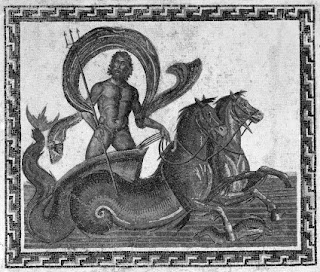 What religion rarely is, in the real world, is black and white.  Whatever the reality or otherwise of the God or Gods, His, Her or Their words must necessarily be interpreted by human beings and no two human beings have ever interpreted anything in precisely the same way (a fact which goes some way to explain why I've somehow managed to acquire six different recordings of Stravinsky's Firebird Suite).  Most Christians seem happy to agree that the Christian God is all-loving but dig down deeper as to whether that love is of the "It's a big old world, let's all try to rub along together as best we can; come on, guys, group hug" kind or the "I'm doing this for your own good and it's going to hurt me a lot more than it will hurt you" kind and you're liable to produce a punch-up.  Whatever religion may tell us about religion, it tells us an awful lot more about ourselves.

In fantastical worlds, on the other hand, religion often comes, if it comes at all, after everything else (even in the case of someone like C.S. Lewis, with the consciously religiously-allegorical Narnia tales, it still seems to have taken second place to a certain stiff-corduroy-trousered Oxford donnishness and distrust of people in possession of ovaries); authors, who have to do things like earn money, are unlikely to have time to put together fantastical versions of, say, the Bhagavad Gita, or the Talmud or the works of St Augustine, let alone all of them, and certainly don't have the time to think about the vast number of commentaries those texts have themselves produced.

Even when a god or gods do appear, they tend to fit the Homeric mould: cast as gigantic replicas of humanity, awesome in their power but recognisable in their flaws, more like heroes from a tent-pole Hollywood summer blockbuster than embodiments of the ineffable.  These are dei who can be relied on to emerge from their machines ready to smite this, blow up that and then take on the form of a swan to have sex with her, rather than the more distant, far-less-knowable beings found in most world religions.

There are, of course, very many exceptions to the above and I would hope that Otherwhile might be among them.  I want the world of Otherwhile to have a living, breathing feel and to do that its societies need to be informed, at least in part, by some kind of religion. But, due to the problems outlined above, I wanted to work with a religion that was slimmed-down, whilst at the same time affording interesting ideas for me to play with as author.  Given the way different cultures have differed and divided themselves by their beliefs, it seemed a fun idea for Otherwhile to have a single god for the whole world and then see how the different inhabitants could divide themselves despite belief in the same Creator.

To an extent this is an experiment we've already seen carried out in reality: followers of the three Abrahamic religions have had a tendency to see eye-to-eye only when they're fighting hand-to-hand.  To make things more interesting (for the author, at least), I've taken steps to make conflict even more difficult.  The god of Otherwhile is the kind of god Enlightenment deists would almost certainly have whole-heartedly embraced: It created the universe and then left; It has no desire to interfere in humanity's destiny and will not do so; It is eternally unreachable. What's more, this god has gone even further and made sure that every last one of the creatures in the universe it created knows that the god exists, that it created the universe, and that it has now left and won't ever be returning.  It's not for no reason that the god is known all across Otherwhile as 'The Absented'.

And yet and yet, for all The Absented's efforts, humanity's deep spirit of enquiry and seemingly eternal desire for conflict won't easily be denied.  Their god may have done everything in Its power to discourage any sort of worship but that won't put Its people off.  That's where groups like The Veils (whom you may have met in The Coming of The Murrain) come from: they insist on believing that it is each human's duty to give meaning to its life, a meaning which they (or at least, most of them) find in ministering to the sick and poor.  They wear cloth around their head as a form of symbolic blinding (they can, in fact, see through the cloth) in order to show that, despite the quasi-religious nature of many of their teachings, they are not seeking the Absented.

And Otherwhile, of course, will contain several groupings like The Veils, some quasi-religious, some philosophical, some a combination of both.  And then, of course, there will be atheists even in the face of certain knowledge of The Absented's existence, because some people are just bloody-minded.

How much of all this will make its presence felt in Otherwhile I don't yet know (although The Veils have already succeeded in making their way in and I do know a non-conformist firebrand from their order will certainly have a role to play), especially given that the book I'm working towards is supposed to be an old-fashioned adventure yarn rather than a Glass-Bead-Game-style quasi-philosophical text (which would be a rather out of my league), but it's another piece of background from which to pluck ideas and it's very reassuring to know it's there when I need it.
at 09:36