[Rather unjustly, at the end of Some Information Concerning Wandering Mountains, Pt I, I left Lemnick of Carysfort and his friend Merrum about to listen to the tale of the mysterious stranger they had encountered among some wreckage at the edge of a vast natural basin.  At least I say it was natural; Lemnick and Merrum's guide swore that a mountain should have been on the exact spot where the basin stood.  Moreover, the previous night had been witness to the noise of a terrible chase, as if some beast of unimaginable size were being chased through the mountains.

In any event, I left Lemnick and Merrum where they were and, instead of telling the stranger's tale, went on to tell The Mountainherd's Tale, which, though similar in meaning to the stranger's tale, was rather different in detail.  Let's say it was a tale of Mountainherds and Stonesailors and of craft and of love and of betrayal and leave it at that.  I'm hoping that you, my reader, will make your own mind up as to exactly what the stranger said, and let me continue Lemnick's letter to his King at the point where the stranger's story ends ...]

At last, the misty-eyed fellow fell Silent and Merrum and I were left to contemplate his Words.  I could see from the look in Merrum's Eye that we had both arrived at the same Conclusion: the man was Entirely out of his Senses.  It is all very well to tell Tales of Wandering Mountains and Ships That Sail Over Land, but it is quite another thing to Believe them.  And this fellow clearly Believed, not merely that the Tale was true but that he was the Mountainherd at its heart, and that his actions had caused a Mountain to go gallivanting about The Spine of The World like a lost lamb gambolling over a Field. 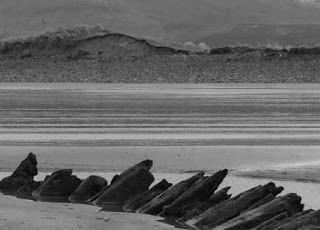 Keeping our voices Low and our Movements soft, we did our best to Calm the fellow but he was having None of it.  Instead he continued to Rave about the man he had Wronged and the woman who was Lost to him forever.  We should have had to have left him there had it not been for the sudden appearance of a woman at the top of the same path that Merrum and I had taken some hours before.

"Kukush", she called out, "I have found you at last".  At this, our Misty-Eyed Lunatick looked up towards her and gave a Sigh, of the kind a man gives when a long-expected Moment has finally Arrived.

The woman was soon Among us, making swift apologies for the behaviour of the man she called Kukush.  I could see at once that she was of the Lunatick's tribe, having the same short, though lean and well-muscled, form.  As for the man himself, he waited for our new Friend to finish her words and then gestured to the Wreckage round about him, the Wreckage he claimed was that of his Stone-Sailing ship, before looking Directly at her.  "Your work is already done", he said.

At this the woman nodded, then placed a Hand upon his shoulder.  "Come, Kukush", she said, "you have troubled these people too long".

The man nodded and Rose up and made ready to follow her, first of all taking my hand and then Merrum's in turn and Thanking us for listening to his tale and offering his hope that he had Amused us with its Fancy.  Then the pair turned from us and we watched them walk away in Silence.  When at last they had disappeared beyond a curve in the path, we returned to our mounts, I remarking that it had been a rather Extraordinary day.

"Extraordinary indeed", said Merrum and then he opened his hand, into which it seemed this Kukush had placed a small object as he bade him farewell.  It was a sphere of mountainsbreath, carved with such art that the very thought of it brings a tear to my eye even now.

We heard no more of Kukush and the woman who took him away.  And perhaps we Saw no more of them. I say "perhaps" for, late that same night, in the greying Light, I thought I spied a wooden Craft sailing between the Mountains, with a woman at its tiller and a man, bent and weeping, sat at its prow. But then again, I was tired and it was late.  And, as Your Most High Majesty well knows, there are no boats that can sail over land, save for the boats in Fairytales.
at 15:19