More News from The Real-ish World

Back in the real-ish world, I can announce that today sees the publication of "Jacob Jones and the Bigfoot Mystery", a game project I had the enormous fun of writing on.  It's a puzzle-adventure from Lucid Games, it's only £1.99/$2.99 on the Apple App Store for those of you with iPhones and iPads and £1.59/€1.99 on the Playstation Network for PS Vita users. 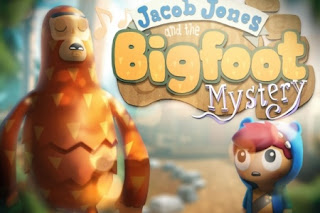 Merrily cherry-picking my ways through the reviews thus far (and studiously ignoring the one reviewer who loathed it in a way normally reserved for Genghis Khan or a new episode of Ben Elton's The Wright Way) I can officially big myself up by describing it as infusing "the cute story of one boy and his yeti with enjoyable conundrums and head scratchers" (Pocketgamer), add that it has "a superbly whimsical story" (God is a Geek) and that the "interactions are funny, unpredictable and a delight to watch" (The Sixth Axis)  and finish up by saying "the dialogue is brilliantly written" (Push Square).  More importantly the game and its characters are the brainchildren of the fabulous team at Lucid Games, it has an art style that bowled me over from the moment I saw the very first render and it should be enormous fun to play.  Lastly, I had nothing to do with the puzzles themselves, so will be absolutely no use if you're stuck.

Ooh, and here's the new trailer:

And more nice words about Jacob Jones.  According to The Guardian "There is justifiably bags of buzz about this", "its the quality of the puzzles that makes it a keeper" and "the storyline also keeps you engrossed".  This is some sort of karmic repayment for four decades of loyal Grauniad-reading.
at 12:51