A Quick Game of Cards

[Again, just time for a quick update this week, looking at one of Otherwhile's favourite pastimes: Wyrtekken] 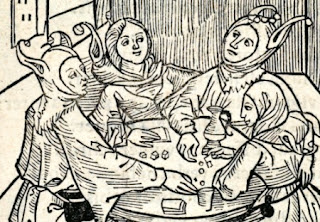 The average Otherwan, on the rare occasions he can get hold of anything to gamble with, is particularly fond of card games played with the Wyrtekken deck.  The deck contains sixty cards in five suits, listed here in their standard order of game rank :

There are twelve cards in each suit, each given a number and title.

Unusually, in most Otherwan card games, a card's rank is inverse to its numeric value.  Thus The Absented of Hopes is the most prized card and The Dancing Crows of Sleeps the least.

Although Wyrtekken decks vary quite widely, it is normal for each card to bear an image fitted to its name.  The Laughing Cats is a frequent exception to this rule, often being illustrated not with an image of cats but with the picture of a silver-haired woman and a fallen citadel.  Perhaps significantly, an image of this same silver-haired woman walking arm-in-arm with a tall, dark-haired man is frequently used for The Brother and The Sister.  Again, the image used for The Dancing Crows is often that of a group of dancing Cawfolk or Crowpeople, rather than birds; it tends to look rather sinister.

Though the Otherwan people are highly susceptible to superstition, and have much to be superstitious about, the use of Wyrtekken cards for divination or prophecy is either unknown or extremely rare.
at 09:15

Email ThisBlogThis!Share to TwitterShare to FacebookShare to Pinterest
Labels: Otherwhile