The Tale of the Crowgirl

Not so long ago and not so far from here there lived an old man and an old woman.  They were very happy in themselves and in each other, save for one thing: they could not have any children.  Now it happened that one day, when the old man was on his way to market, he came across a birdseller being waylaid by two ruffians.  The old man was strong for his age and had seen long service in the army of the Queens of Day.  So it was that he set upon the ruffians, belabouring them with his crook until all that could be seen of their skin was black and blue and purple and red, and they fled off into the woods never to be seen again, leaving the old man and the birdseller to gather up the scattered cages that held her chittering, flittering birds. 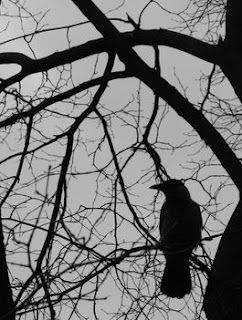 Now the birdseller, who was young and very fair, was most grateful to the old man and asked him whether there was anything that he desired.  Being a little slower of mind than he was of arm, the old man shook his head, telling her that his dearest wish was one she could not fulfil, which was that he should have a child.  Hearing this, the birdseller smiled and reached into one of her cages and drew out from it a crow, which sat patiently upon her finger.  She spoke to the bird in a language the old man could not understand and when she had finished speaking it hopped down from her hand towards the earth.  But as its feet touched the ground it was no longer a crow but a small girl, no higher than the old man's knee, with long, dark hair and eyes like the night sky.  Gravely, the child walked towards the old man and took hold of his outstretched hand.

The old man nodded at her words and, satisfied that he had understood, she took up her birds and cages and walked away and was never seen by him again.

And so the old man walked home, the crowgirl skipping happily along at his side.  And when the old woman saw them arrive and heard the tale of what had happened, her face split in a wide smile and laughter bubbled in her belly and she joined her husband and the crowgirl in a dance of joy.

The years passed as years will do and the crowgirl grew into a young women.  She was fleet of thought and light of foot, her laughter was as warm as sun in summer and the only tears she knew were ones of happiness.  The old man and old woman loved her very much and tended to her with all the care and gentleness a parent could have and always they heeded the birdseller's words and never once let her bare feet touch the earth or her teeth touch meat, nor did they let her approach a flame.

Now villages are close-minded places and strangers and strangeness have little room in them but, for all that, the crowgirl's wit and beauty and warm-heart were such that all who met her loved her and none ever questioned who she was or where she came from.

As the crowgirl's beauty moved from bud to blossom, the old man and old woman found a steady stream of visitors coming to their gate, to gaze upon their daughter's long, dark hair and eyes like night, and to sigh.  Soon, word of her charm reached the ear of the local lord and soon this handsome prince found his heart captured by her mind and looks and laughter and soon again did he bow down before her and seek her hand  in marriage and sooner still she put her arms around him and said, "Yes".

The marriage day came swift as summer swallows and the old man and the old woman and all the people of the village gathered before the lord's hall for a celebration such as had rarely been seen.  Eagerly they helped to cut back the grass so that there might be dancing, and to carry the meats and wines and fish and fruit that there might be feasting and to pile high the wood that great fires might burn long into the merry night.  And in the midst of all the rushing and bustling, the crowgirl and her lord stood together, wrapped in happiness, awaiting the moment that they might speak their vows.  And when their vows were spoken, they kissed such a kiss as has never been known and a great shout of joy went up from those assembled and the casks were cracked and the fires were lit and a great, wild dance was begun.   And now the old man and old woman looked down upon their daughter and her lord and they found their hearts swelling with pride.

The crowgirl and her lord were plied with wine and fêted by all and filled up with the love they had for each other and the love others had for them, so that they became giddy with it all.  And when the villagers called on their dark-haired girl to dance, she kicked off her shoes and span into the middle of the grassy circle and led a long and lively dance, her bare feet beating down against the earth.  And such was the old man's pride in his daughter that he said nothing.  And when the servants brought forth the fruit and fish and meat they had prepared, the lord and his crowgirl enjoyed all, the crowgirl savouring the sweet taste of flesh against her teeth.    And such was the old woman's pride in her daughter that she said nothing.  And then night's cold began to lurk and the fires were stoked to send it back and then the crowgirl held out her hands to the flames that they might be warm. And at that moment the words of the birdseller echoed in the minds of the old man and the old woman and both cried out.

They were too late.  A single flame, whipped by a sudden wind, licked against the crowgirl's hand and, at its touch, something within her leapt away in fear and, as it leapt, it thought upon the heat of the fire and the touch of meat against teeth and the feel of earth under foot ... and then it thought of fear and the wriggling of worms in beaks and the feel of the ground beneath claws.  And at that moment, the crowgirl's dark hair turned to feathers and her dark eyes turned as black as coal and her laughter turned to a crow's harsh caw and then she was a girl no longer, merely a small, black bird, leaping into the night sky and away from the flames.

And so time passed as time does and a year and a day went by from the lord's wedding to the crowgirl.  That night, as the people of the village and the hall lay in their beds asleep and the moon tucked herself behind the clouds, there came a rustling in the sky, distant at first and then ever closer, sounding all the while like a soft blanket being drawn over a child.  Such a calm sound it was that all in the village and the hall were cast deeper into their slumbers.  Soon they were so fast asleep that they did not hear the sound break up as it drew near, becoming the noise of many wings, beating against the air.  Nor did they see the dark and many-eyed cloud, blacker even than the night, which approached the little village.  Nor did the hear the many caws, and khows and karks that issued from it.  They slept on even as cunning claws and beaks scratched at locks and pulled at windows, as creatures hopped and flew from house to house and bed to bed and crib to crib.

Next morning they awoke from a deep and dreamless sleep, into a world of great quiet, a world in which no birds called and no babe cried.  And then, in every house a great wailing went up, as the villagers and lord's men and lord learned what had befallen them, for in all that place every crib was empty and every cot was bare.  Somehow, in the middle of the night, all the children had been snatched away and taken up to a place that few shall ever know.  Some say that they were taken to the home of the West Wind, some to the singing sands of Afar, but one man of uncertain age, more long than tall, and one silver-haired mistress of thieves, say that they were taken to the home of the birdseller, high up in the mountains of Otherwhile, where they were taught many secrets unknown to men.  And that, they say, is how the Crowpeople came to be.
at 08:55