Some Information Concerning the Crowpeople

[It seems that Lemnick of Carysfort has once again let his diplomatic bag go astray, the result of which is that I am now able to provide the following extract from a report directed to the boy-king of Shende, concerning Otherwhile's mysterious Crowpeople.  As ever I would advise my readers that Lemnick's information is highly unlikely to be accurate and that any grains of truth it does happen to contain are almost certainly entirely incidental.]

Knowing, as I am privileged to do, of Your Majesty's abiding interest in the Unusual and Fantastical, I thought it might be meet to apprise your Serene Self of an incident in which I became involved during my recent journey across The Spine of The World, the Mountains which, as I have no doubt Your Majesty will recall, form Otherwhile's northern border1.  These Mountains, snow-capped. rough-sided and with a  tendency to loom rather aggressively, have long been the locus for many items of Otherwan folklore and mythology.  Knowing my interest in such tales, my companion for the journey through this somewhat difficult terrain, Lyre2 Merrum of Melch, an Otherwan nobleman of some distinction, was happy to favour me with some few examples of the lore concerning the creatures known variously as Cawfolk, Feathermen or Crowpeople. 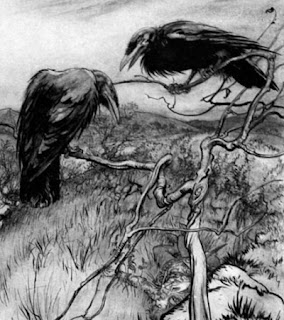 These strange folk are the subject of tales all across Otherwhile, but, I was advised by Merrum, feature most heavily in tales originating in the region around The Spine of The World, perhaps unsurprisingly given the area's surfeit of Mountain Crows, an unusually large species of Corvid, a little bigger than a Raven and reputed to be unusually intelligent even for this most sagacious of birds.

The Crowpeople themselves are variously described.  According to some tales they are Men who take on the form of Birds, according to others they are Birds who take on the form of Women, while yet others aver that they are neither Men nor Women nor Birds but remnants of the First Folk, who reputedly lived upon our World long before Man and Woman first set foot upon it.  Whichever is the case, tales of them have an almost universally dark aspect, being continually associated with Melancholy and with Death.


"One for darkness
Two for rain
Three for sadness
Four for pain
Five for suff'ring
Six for death
Meet seven and draw not one more breath."

Among the many stories Merrum shared with me was that of a crowmaiden, gifted to an old and childless couple, which I found most affecting ...  [At this point in his letter, Lemnick goes on to repeat the Tale of the Crowgirl, which I will omit here]

... As Fortune would have it, it was on the same day that Merrum shared this tale that we were to have our own brush with local superstition.  Whilst travelling through a particularly unfriendly pass, our small party encountered a Snowstorm of such Suddenness and Violence that it scattered men and beasts alike.  Had it not been for the swift actions of my own attendant, Reech, I would have been cast from my horse.  As it was, I was able to gain some control over the creature and, together with Reech and two other retainers was able to rescue Merrum, whose mount had cast him off with some violence, and drag him to some shelter.  With the storm refusing to abate and Merrum both befuddled from a blow to the head and suffering what appeared to be a broken arm, we were in a very sorry state and, I must confess to Your Majesty, I feared my time in Your Service might well be approaching a rather earlier End than I had anticipated.

How thankful, then, was I when, even as the Blizzard raged, the dark Forms of a group of men and women began to emerge from the Storm.  And yet, my Joy was unshared.  Rather than greeting those who approached us as Friends in our Peril, the attendants all began to make the Sign of the Absented and to twist their hands in a manner intended to ward off the Evil Eye.  Reech himself, usually a Man to know his Place and never question it, had the effrontery to put a Hand on my Person and try to draw me away from the Strangers.  I quickly shrugged him off, giving him a Look that, even in the Storm, sufficed to remind him of his Place and of Mine, then took the Time to examine those who drew near.

They were not, admittedly, a group over-endowed with Beauty.  If anything they were somewhat hunch-shouldered and rather short in stature, though their features were sharp and their dark eyes held the spark that marks real Intellect, even as they lurked in their shadowed faces.  They moved with surprising Lightness, hopping neatly across the Snow over which the now-cowering attendants and I had trudged.  None of this seemed extraordinary and I was at a loss to understand what had caused such consternation among my small band until I noted that the Strangers' clothes, which were otherwise of the usual rough type worn by those living in the vicinity of the Mountains, were heavily adorned with Crows' feathers.  Connecting this at once to Merrum's tales, I realised the simple-headed servants had fallen back on superstition and thought the strangers to be the half-bird, half-men Creatures of their Myths.


"Four Cawfolk came a-corpsing by-and-by
One took the lips, another an eye
One took a finger, one stood apart
Then all of 'em battled over who should have the heart"


Dismissing such Superstitious concerns, I called out to the Leader of the approaching Group, who greeted me in return.  His Voice was, I grant, a little harsh and his words and dialect had an Antique quality about them but, nonetheless, all he had to say was Friendly and indicated a willingness to band together to wait out the storm. Thus he called on his Group and soon they were huddled alongside me, while the attendants continued to skulk and mutter their protective Charms.  I meanwhile, had only concern for Merrum, who by now was showing all the signs of a high Fever.

Seeing Merrum's State, a woman with a Face of a kind that even a Mother would turn from it, stepped forward from among our new Companions, announcing that she had some skill as a Healer and would tend to Merrum's wounds.  I must admit to Your Majesty that I had some doubt as to the advisability of allowing a Stranger to attend to my Friend but, given the difficulties of our position and the refusal of the Storm to abate, I felt I had little alternative but to accede, and soon the woman was hopping forward to Merrum's side and twitching an assortment of bone instruments and pouches of powder from a bag she kept at her waist.  This was, I regret, too much for the two remaining attendants who, seeing what they took to be a Crowish Witch approaching, fled at once into the Snows.  My man Reech, meanwhile, turned away from us all and burrowed deep within his cloak, babbling his own Charms.  Appalled at such ignorance, I waved the woman to her work.

I will not bore Your Majesty with all the Details of the doctoring with which Merrum was attended by the ill-favoured medicine woman, but there are some Peculiarities which I feel sure Serene Self would have the Kindness to enjoy.  The treatment was begun by the woman throwing a red-tinted powder onto the snow, for all the world making the area around Merrum appear like some blood-stained Field of battle.  Next she let out a series of rasping cries, strangely unmuffled by the winds which continued to beat at our poor shelter.  Then she produced a few scraps of tinder which, when kindled with a striking stone, let off a powerful, not unpleasant odour.  She next began to waft the burning substance under Merrum's nose, which Procedure appeared to further loosen the bonds of his mind on his Surroundings and send him deeper into sleep.  After this, she began a long and looping dance around Merrum's body, at the same time giving voice to a series of low ululations.  The effect was strongly soporific, something confirmed by the fact that I too was soon slipping into Unconsciousness, with only time to note that, huddled at some distance as he was, Reech also appeared to have surrendered his mind to Oblivion.

I did not wake until the next morning, when I found the storm abated, Reech seeing to my horse, Merrum hale, in good heart and entirely unaware of the events that had befallen him and the Strangers entirely gone. Not one sign was there that they had ever been about and no sign of them did we ever encounter on the rest of our journey through the pass, though we must surely have followed the same Paths as they.  When I questioned Reech about it, he made signs against the Evil Eye and muttered that we had "met the Crowmen and survived" and that we should "give thanks to the Absented for it".  I, of course, was quick to dismiss such foolishness, yet it did at least furnish me with an Example of the tight grasp the legend of the Crowpeople exerts on the minds of simpler men even to this day, an Example which I am gratified to be able to pass on to Your Serene Self.

There is but one small addendum to my story, which is this: a day's journey after we had met the Storm and Merrum had received aid at the Strangers' hands, we encountered the servants who had run off at the beginning of the Medicine Woman's ritual.  They were, I regret to say, dead, having perished in the storm.  It was in truth a pitiable sight, a testament to the dangers of Ignorance, made all the worse by the fact that, even after exacting the Tribute of their Lives, Nature had sought yet more of them, for it was evident on close examination that both men's eyes had been neatly plucked out, as if by some claw or beak.

1. Those seeking a map of Otherwhile will find it here↩
2. "Lyre" is the rough Otherwan equivalent of our own "Sir" and indicates someone whose position is somewhere between a knight and a member of the nobility.  The same term is used for persons of either sex.↩
at 09:01