A Fairytale Relationship?: Disney/Pixar and the Fairytale Family

Margaret Thatcher famously said in an interview with Woman's Own that there was no such thing as society, insisting there were only "[i]ndividual men and women and ... families".  Perrault and the Grimms and all those who have followed the breadcrumb trail they left behind, would agree with the quondam Prime Minister about that: in the world of fairytale, big government has built no metalled paths through the forest, provided no police to track down granny-eating wolves, and created no building regulations to outlaw the erection of gingerbread houses.  The world outside our heroes' and heroines' doors is an Objectivist dreamworld in which there is no-one to stand in the way of the strong ... apart of course from all those wolves, forests, dwarfs, ogres, giants, dogs with eyes the size of cartwheels, witches, magicians and the like, not to mention all the problems caused by the absence of roads and police and the fact that it's difficult to rule the world with dignity when a spicy cake-based wall has just collapsed on you.

But the world inside our heroes' and heroines' doors is worse.  Fairytale parents won't just give you a clip round the ear for selling the cow for a bunch of magic beans, they'll send you to slave among the cinders, they'll gamble you away, they'll abandon you in the forest, they'll trade you to the local witch.  Fathers are either drunks, gamblers or slaves to their second wives, mothers are usually dead, step-mothers are ... well we all know how much fairytales love stepmothers. No, if you want to find a good parent in fairyland, you need to look for the nearest graveyard;1 the fairytale world is littered with orphans and - looking at the alternatives - those orphans should be thankful for it. 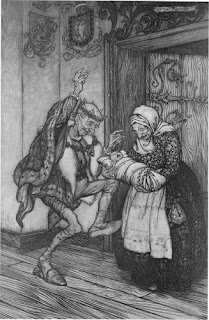 From the point of view of the stories themselves, ensuring that the central character's parents are absent or unsympathetic has a lot of advantages: it gets a lot of backstory out of the way quickly (like Holden Caulfield, fairytale characters rarely want us to know "all that David Copperfield kind of crap") and lets us know exactly where our sympathies should lie (because who wouldn't feel for an orphan/bullied stepchild/victim of a braggart father/&c).  Fairy stories - at least in their original form - are short and punchy, the last thing they want you to do is to start feeling for someone other than Cinders or Snow or that plucky young Seventh Son of a Seventh Son2.  It's a lesson well learned by children's authors from Roald Dahl to Lloyd Alexander to Frances Hardinge and has seen fantasy authors of all stripes send a legion of orphans out on their quests.  Its a tool that works and works well.

And this is something I was thinking about recently after watching two Disney/Pixar animations, Brave and Tangled.   Both films were exec'd by John Lasseter, both feature a strong heroine struggling to deal with a mother figure, both were made by what is now essentially the same company within the space of a couple of years. Tangled I thought was fabulous - bringing the story of Rapunzel up-to-date without ever losing sight of the fairytale's origins - Brave, on the other hand, a conscious attempt to create a new fairytale, was ... well, I really didn't like it at all.   Given all the similarities, I wanted to know why my reaction to each was so different.  And I think I found the answer in the different ways the two films approach that central, mother-daughter relationship.

Tangled is the story of the Princess Rapunzel, kidnapped from her crib and locked away in a high tower by the wicked Mother Gothel, who's intent on using the magic power of Rapunzel's hair to keep herself eternally young.  With the aid of a handsome rogue, a bloodhound of a horse and a pet chameleon, she will escape the tower, find true love and be reunited with her true parents, the King and Queen.

Brave is the story of Merida3, a young, tomboyish Scottish princess.  She is granted one wish and - eager to follow her own path and not the role of traditional princess-hood her mother has chosen for - she uses it to change her mother.  Unfortunately, rather than changing her mother's mind about the princess's path, the wish changes her mother's body into that of a bear.  What's worse, unless the princess can rectify matters within two days, her mother will become a bear - in both body and mind - forever.  You remember you did something really terrible as a child, something which was so awful your mum didn't get angry, she just looked at you with eyes that held more hurt than you knew could exist until that moment?  Well Brave is the film of that moment. 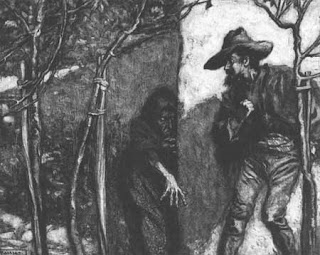 And here lies the problem: Tangled is a fairy story - one with too many highly forgettable songs, admittedly, but definitely a fairy story and one told with panache and some good gags too; Brave is a trip to the psychiatrist's couch.  And the main cause of this difference is the way the two films deal with the family.  In Tangled, mum and dad are out of the way and Rapunzel's surrogate parent, Mother Gothel, is thoroughly hateful.  We know from the very beginning who we're going to root for and why and we all feel very glad when (if this is a spoiler, you really haven't read enough fairy stories) Mother Gothel comes to a sticky end.  In Brave on the other hand, we're never quite sure whose side we should be on - Merida's or her mother's.  The Scottish queen may be a bit demanding at times but there's no way we feel she should be turned into a bear - particularly when she's played by the stalwart Emma Thompson.  On the other hand, making the young Merida responsible for something so hideous as her mother's transformation from royal to ravening beast feels unnecessarily cruel on the part of the writers.  Overall, with Brave one can't help but feel that the production team has come at the story from the point of view of the adult, not the child.  The final moral - hey, we all need to compromise at times if we're going to get along - rings with the dull and patronising tones of the closing segments of a Brady Bunch episode, or the ghastly "Hey kids ..." endings of a He-Man cartoon.4 and that really doesn't seem right at all.

And what, if anything, does all this blether have to do with Otherwhile and the story I'm currently planning to tell in it?  Well, not much, beyond helping a little to flesh out the kind of world Otherwhile is - a world where parents are kept at a distance, as parents sometimes need to be.  It's hard to go on a lonely adventure with dad walking by your side and there's no need to be brave when mum's all set to tuck you in.  The sixth son of a seventh son will have lost his mother and father (possibly in an unfortunate, porridge-related incident) many years before and, as for the heroine, her folks will be kept away from the story for reasons that will have to wait a while to become clear - sometimes a spoiler warning just isn't enough.


1. A particularly good example of this is Cinderella's mother who, in some versions of the story, provides guidance to her daughter from beyond the grave, as noted by Lissa Sloan here↩
2. Of course, there are exceptions, one of the most notable being Beauty and The Beast, which directs our sympathies not only to Beauty's father, heartbroken at the stupidity that has robbed him of a daughter, but also the Beast himself. But then again, Beauty and The Beast is far from a typical fairy story, being descended from Apuleius's Cupid and Psyche, written in the Second Century C.E.  For more, see here.↩
3. A Spanish name, derived from Latin, and not in any way Scottish, which is rather a worrying sign as to the care put into the script.↩
4. Incidentally, similar problems pop up through much of the Pixar oeuvre.  In Wall-E and Up we have orphaned children (admittedly, Up's Carl Fredricksen must have lost his parents quite a while ago, but the loss of his wife has left him emotionally orphaned and childish in an even more profound way than the loss of a parent) and we focus on them with laser-like intensity.  In the, for me, more problematic films like The Incredibles and Finding Nemo we spend significant parts of the movie (in the case of The Incredibles, all of it), looking at things from the hurt and resentful point of view of an adult.  The result is, again for me, a lack of charm and a tendency to on-the-nose writing (and in the case of The Incredibles a distinctly Randian flavour to the whole movie).↩
at 08:52